Sweden is home to ten sighthound racing tracks registered with the Swedish Dogs Sports Federation (Svenska Hundkapplöpningssportens Centralförbund). All the racing events are arranged by local clubs, not by the central organisation.

Most races are open to all kinds of sighthounds and you can therefore get to see greyhounds run alongside salukis, whippets, afghans, and more. The situation in Sweden is not like in Great Britain or the United States where greyhound racing is big business, strongly tied to betting and carried out by full-time professionals. Dog racing in Sweden is more of a hobby endeavour.

Typically, no racing takes place during the Swedish winter. Depending on local weather conditions, the racecourses tend to open in April or May and stay open until October or November.

For more information about greyhound racing in Sweden, I recommend that you visit vinnare.se.  One of Swedens best websites about gambling and casinos in Sweden. Vinnare.se is a Swedish language website but you can use google translate to read it.

The most common race distances in Sweden:

For more information about the race schedule, visit shcf.se. This is also the site were race results are announced.

As mentioned above, ten dog race courses in Sweden are registered with the SHCF.

These are the ten dog race courses:

This race course is located roughly 40 km north of Stockholm, in the small town Åkersberga. You can catch the commuter train from Stockholm to Åkersberga; the racecourse is just a short walk from the Åkersberga Railwaystation.

Åkers Kanal Greyhound Park, which was inaugurated in the year 2000, consists of a race track (with bleachers), a café and a veterinary station.

This is the home court of Stockholms Hundkapplöpningssällskap (SHS) and they arrange following races:

Important: ÖHK-NoHS also has access to a 250 meters long straight turf race track in the city Norrköping. This track is chiefly used for training, as most competitions are held at Bistabanan in Örebro.

This racecourse was inagurated in 2007, and the Swedish Campionships took place here the following yeaer. Björkis Greyhound Park is located in the Fällbäcken/Boviken community, roughly 6 km north-east of the city Skellefteå in northern Sweden. It is the home course for the dog racing club Skellefteå Hundkapp.

Snacks and refreshments are sold during events.

This racecourse is located in a lush environment just off the highway Riksväg 41, at the outskirts of the city Borås in south-western Sweden. It is the home course for the dog racing club Sjuhäradbygdens Hundkapplöpningssällskap (7HS).

One of the main events of the year is the Borås Grand Prix.

During events, you can buy snacks and refreshments from the Café McTass. (Tass is the Swedish word for paw.) 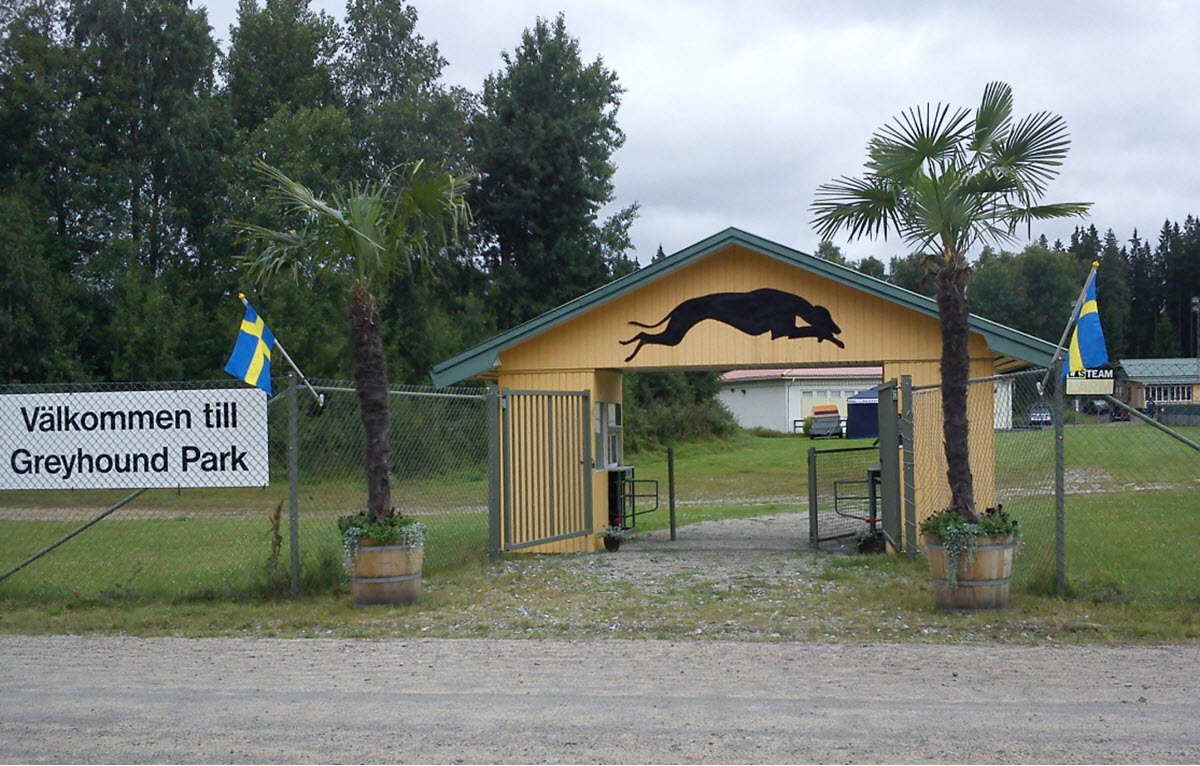 The home course of the dog racing club Cimbria Hundkapplöpningsklubb is found in Östra Tommartorp, near the city of Simrishamn in southern Sweden, within the picturesque Österlen district.

This race track´s main claim to fame is the racing event Tumathorpspokalen (Thumathorps Cup), which was held for the first time in 1973. Other notable events are Silverskölden, Östersjöpokalen and Breeders Cup.

The home racecourse for the dog racing club Gästrike Hundkapplöpningssällskap is found in Järbo, roughly 15 km north of the town Sandviken. The address is Vretens Byväg, Järbo. The racecourse is located in a lush and green environment, and there is a camping ground right next to it.

The Gästrike Hundkapplöpningssällskap is chiefly known for arranging dog racing events as a part of the Midsummer celebrations in June.

The home course of the dog racing club Midlanda Hundkapp (MiHK) is found by the Midlanda Airport near Timrå, roughly 30 km north of the city Sundsvall.

A majority of the canine members of the MiHK are greyhounds and whippets, but certain other fast breeds are also represented, including the Italian sighthound.

All races here are measured electronically using digital cameras, and a digital system is used to snap finish line pictures. The artificial hare was fashioned out of a chainsaw and is controlled by radio signals.

The home course for the dog racing club Norrbottens Hundkapp is located in the town Älvsbyn, roughly 50 km north-west of the city Piteå in northern Sweden.

A majority of the canine members of the club are greyhounds or whippets, but other breeds are represented too, including basenji and saluki.

The main racing events here are Älvsbyloppet and Kanis Elit.

The home court for the dog racing club SDA-GHK is found in Mariedal Park, in the outskirts of the city Alingsås. A majority of the dogs affiliated with the SDA-GHK are greyhounds or whippets, but plenty of other races are known to participate in the races here, such as galgo, rhodesian ridgeback and saluki.

One of the main events of the year is the Breeders Oaks for 3-year old female dogs.

The café is open during events.

This race course, which is the home course for the dog racing club Västerås Hunkapp Hässlö, is located near the airport in the Hässlö area. The closest town is Västerås.